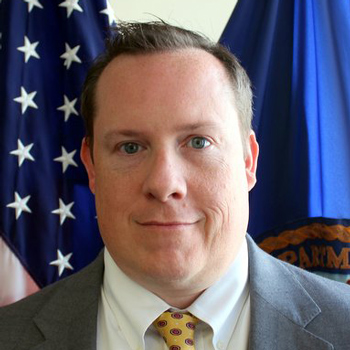 John began his VA career in September 2010, and currently serves as the Deputy Director of Loan Guaranty Service. Along with his most recent position as Chief of Staff for the Deputy Undersecretary for Economic Opportunity, John served as the Assistant Director for Loan Policy and Valuation in the Loan Guaranty Service, where he headed three of the four business lines, overseeing eligibility, and origination, loan Policy, Valuation, Specially Adapted Housing, and all direct loans including the Native American Direct program.  During his tenure in in this role,  VA realized implementation of the automated full file loan review process,  reduced timeliness for determining eligibility from 14 days to less than 48 hours, nationalized all front-end operations of the program, as well as creation of the appraisal management system.

A Veteran himself, John served in the US Navy during Operation Restore Hope and the Gulf War.  Prior to his tenure with VA, John spent 15 years in the private sector, most recently with Bank of America, serving as Vice President of VA Real Estate Management. John also held a variety of senior leadership positions at large lending institutions including Countrywide Home Loans, as Senior Vice President of Sales and Operations, and Regional Vice President of Loan Operations.

While at Countrywide, he led the design of a new portfolio retention strategy, which became an industry leading model.  Additionally, he formed the group which managed the VA property management contract, and was credited with starting a national inspection group. A model still used throughout the industry to reduce costs, improve community relations, and decrease code violations.